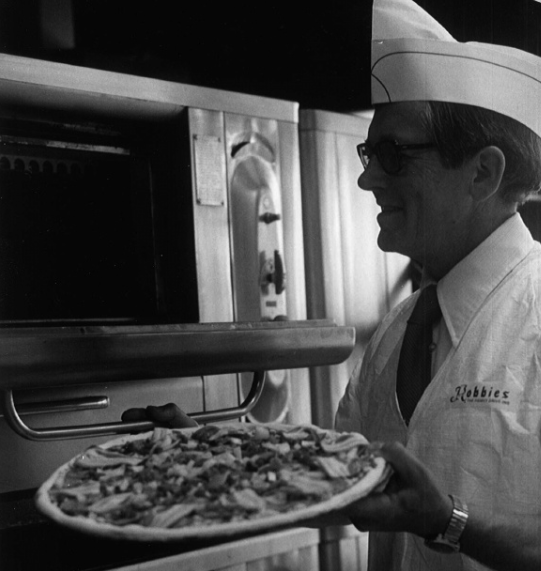 Growing up, I always had a huge sense of pride. Not necessarily of my accomplishments, which mostly amounted to eating 10 hot dogs at one sitting, but pride in the different businesses run by my family members.

My grandfather owned Robbies Pizza. A locally owned pizzeria in Brantford which to date, is still considered to be the best Pizza in town. You can try to insert “Other Guy is better” comment here, but your argument is invalid. The “Other Guy” didn’t have Sassy Fries. Robbies was, and still is, an institution in Brantford. Even though it’s been gone for over 20 years, I still proudly advertise my local celebrity to friends and clients. You’d be surprised by the number of them who remember the drive-in store across from P.J. It’s now a Shell gas station, but the parking median’s and wooden fence that my granddad built, are still there.

My Papa also had a business of his own. He was a multi sales type bloke, driving his truck & trailer to automotive shops, construction sites and pretty much any place he could sell his wares. The company was Fasteners Unlimited and it was famous for two things. First you could buy pretty much any kind of bolt, nut, and screw out of the back. The second, from what I could gather from reading my dad’s high school yearbooks, was the acronym for the company. I don’t really think he thought the company name through, but nonetheless F.U. was effective. I remember on school PA days, going out on his run with him, meeting all of his clients. A memorable one was Hostess Potato chips, no need for an explanation here. It was cool though, being on the road with him, no walls, no office, just the open road and a truck full of potential.

My father started in the insurance & investment industry 27 years ago after leaving a great job at Nadrosfsky Steel (By the way, it was family owned by his uncle). His choice to venture into the insurance & investment industry was an interesting one, as it allowed him to stake a claim in his own business. Fate? I don’t think so. I honestly think that owning a family business is not something you just do. It’s something that is engrained in your DNA. Passed down from generation to generation.

I started my career right out of high school. I was slated to start college taking Mechanical Engineering, but something held me back. Lucky enough, I was given the opportunity to work at a local, family owned machine shop in Brantford. So, I decided to forego college and make some money instead of spending it. A year later the college apprenticeship opportunity knocked and I took it. We manufactured moulds that made plastic Coke, Pepsi, Gatorade and Water bottles. I worked my way through the manufacturing floor and into the office into a junior sales/service position. It was a great learning experience. It gave me a career, which bought my house and helped start my family. However, much like my decision to hold off on college, something was holding me back. A calling? Voices perhaps. Or was it my DNA? I’m going to go on a limb here and say it was my DNA. But what kind of crazy idiot with a child on the way would ever want to leave the weekly paycheck they knew would be deposited into their bank account? Even still, what kind of crazy idiot would plant themselves into a family business where they’re working with their father, mother, siblings, and wife? Apparently, this crazy idiot.

My point? I think that there are those who like being an employee and those who would rather be the employer. I was watching a new show the other night on Comedy Network called Samson & Son. It’s a sitcom about a son who comes back to small town USA to celebrate his father’s anniversary of owning a local bar; a bar that he bought from his father 30 years prior. As you can probably guess, the son decided to dump his high paying position as a Vice President and compliance lawyer at an investment firm to buy the bar. The show was funny, but it’s not what drew me to give up 22 minutes of my Monday night.

The family business dynamic is what kept me watching. The bar is not much different from our insurance & investment practice, which is not too different from F.U., which is not too different from Robbies Pizza. We all get to work with our parents, kids, siblings and wives on a daily basis. We never talk business at the dinner table because Vito Corleone said not to. We all have something that was cut in the cloth that made us, and it’s something that my kids will most likely have, and their kids and their kids. It’s that “Family Business” gene that’s firmly planted between two strains of crazy.

If I can leave you with one thing, it’s simply that there are so many family businesses in this great town of ours. I urge everyone to explore past the big box, pre-cooked, flash frozen institutions and utilize the services of the locally owned family shops in Brantford. You just may find that place that feels like home, where you don’t mind spending a few more minutes talking with the owners.