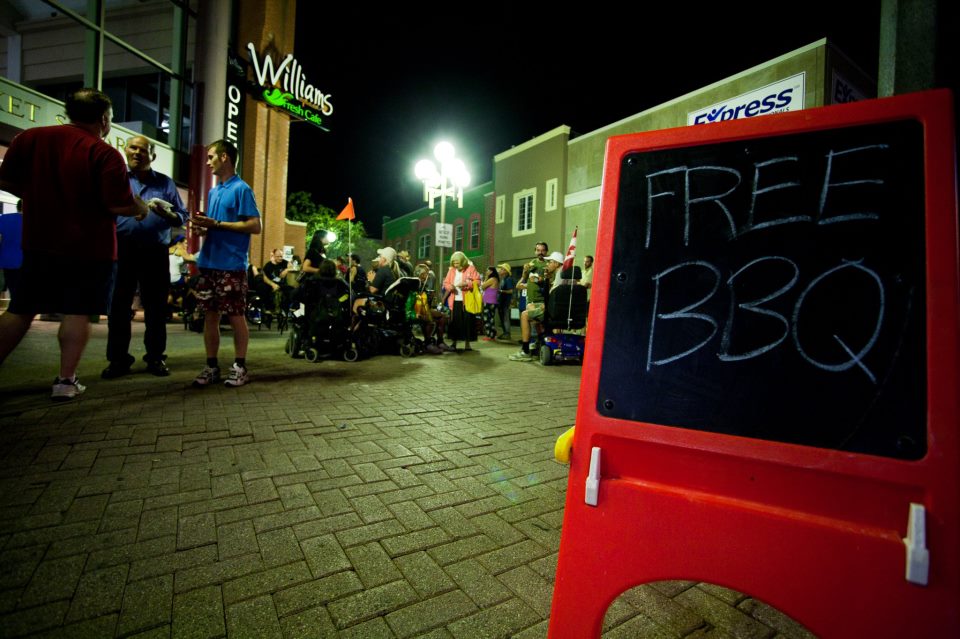 Every summer for the last six years, my friends at Freedom House have given away 1000’s of hamburgers at an event we call Flippin’ Fridays. It really is a simple idea – basically we set up a BBQ outside of our building and serve free street meat to whoever comes by wanting some food or a friend (or both).

We have served the poor, the prosperous, pushers, politicians, the pious, pagans, pimps, prostitutes, the passive, the peaceful, the pushy, the powerful – you know… people.

No hoops to jump through, no strings attached – just simple, but powerful acts of kindness to change the culture of a small section of our city. That’s how we define it now, when we first started Flippin’ Fridays, we just knew we needed to do something to get to know the people in our neighbourhood, because we had no connection to them at all. And to take it further, we quite frankly didn’t like what we saw in Brantford after dark.

Let me tell you the power of a burger from a story during one Flippin’ Friday last year.

As usual we were set up by 10pm with plans to serve burgers until about 2-3am. It had been a very busy night, with an above average amount of burgers served. At one point, I felt sorry for the BBQers, so I took my turn cooking at the grill. To be honest, I very seldom do the cooking – usually I am talking it up with our friends who come by, making sure that everyone gets greeted and has an opportunity for dialogue if they wish to engage. At one point in the evening while BBQing, I remembered a group of guys coming by who were particularly talkative – a couple of them being a little impatient, a couple of them being more amiable. We served them some burgers and they went on their way – not knowing whether we’d see them again that night or ever. We would soon find out.

It was exactly 2:10am and the door flew open at the Vegas Bar across the road from our BBQ. One loan man, clearly intoxicated came running out of the bar with five others running after him. The group of five circled the loan man and were about to beat him into another state of consciousness. I had watched the action for a couple of minutes and decided that it didn’t seem right for me to stand there and watch one guy get beat up by five others, so I made my way past our Freedom House team, past the few BBQees that were still hanging out and ran into the middle of the action. I remember thinking as I was on my way, “I hope this turns out well”. Within seconds I was standing in front of the drunk man, which meant now, we were both surrounded.

One of the five guys then turned his attention to me and it was very clear that he was not looking for a dancing partner. He said some things that I sure he didn’t mean, using some descriptive language that seemed odd for such a quiet moment, ending with numerous threats to my physical body. What broke up the excitement was one of his friends with the following statement.

Dude 2 ignored dude one and said a few more statements that I suggested were bad ideas.

With that proclamation, dude 2 looked at me closely, and the revelation came to him that I was indeed “the cook” and “the chef” – the very one they had received free burgers from earlier that evening – and he backed away.

From that point I grabbed the first guy by the scruff of the neck and tried to get him a taxi, so he could get home safely. Instead, he choose to walk away which lead to another altercation with the another member of the group of five that ended up involving the police and fire department and EMS workers and a huge crowd of on-lookers and concerned citizens.

I don’t want to dwell on the last part of the story. Go back to the part where dude 2 backs down from his aggressive behaviour because dude 1 remembered that I was “the chef”. We call that the power of a burger. The power of something very simple and trivial and inexpensive and easily accessible – the kind of thing that each of us has within our reach every day. A seemingly insignificant gesture of kindness that has the power to change a volatile situation into a harmless one or a simple statement that could lighten someone’s otherwise darkened day. At the risk of sounding melodramatic, it’s almost miraculous. Maybe it is… or maybe it’s just simple, intentional, strategic kindness that anyone can do (maybe it’s both).

Now, perhaps you will never find yourself in the middle of Dalhousie Street needing to break up a street brawl at 2:10 in the morning. Perhaps you’ll never serve a few free burgers to the poor, the pagans, the pious or the pushy people. But, you will have the opportunity every day to offer someone an act of kindness that could very well change their life (or day) and it just might change yours too.

“I would rather make mistakes in kindness and compassion than work miracles in unkindness and hardness.” – Mother Teresa

“Kindness is the language which the deaf can hear and the blind can see.” – Mark Twain

“Do your little bit of good where you are; it’s those little bits of good put together that overwhelm the world.” – Desmond Tutu

One Reply to “The Power of a Burger (Brian Beattie, @FHBrantford)”