Who doesn’t remember the Mel Brook’s 1974 movie classic, “Blazing Saddles?” How many of us connected with the townspeople as they gasped in unison when they saw the ‘Black Sheriff’ ride into town. How we, the audience, laughed with mixed emotion at the unexpected appearance of a ‘Black Sheriff’. This masterful script helped break down stereotypical attitudes towards Blacks in movies, daring to enter the all white domain of the ‘wild west’. I also believe, along with many other events, it contributed to the positive overall national and international Black movement for equality.

Did Mel Brooks know that his new movie character mirrored an actual historic person? Whether he did or didn’t I would suggest that most people (myself included) did not know, and that’s why we were so surprised by his Black Sheriff. Had we known that there had indeed been a Black Sheriff during the period portrayed in the film we wouldn’t have been as taken aback as we were.

I was sent an article titled, “The REAL ‘Lone Ranger’ Was an African American Lawman Who Lived With Native American Indians” written by Micah Naziri on October 23, 2013. Mr. Naziri is making a case suggesting that Bass Reeves, an actual historic person, was the inspiration for the Lone Ranger radio series that eventually evolved into the Lone Ranger TV series and subsequent movies, including the newest release of the Lone Ranger in 2013.

After many months of research and having just completed and released my new book, “Tonto: The Man in Front of the Mask,” the biography of Jay Silverheels, this article was ‘unexpected’. I read it, checked out its sources, and am convinced of its authenticity. I needed to see whether the writer of the article was really stretching to make a connection, or if I thought he made reasonable assumptions.

Vaunda Michaux Nelson’s biography of Bass Reeves, “Bad News for Outlaws: The Remarkable Life of Bass Reeves, Deputy U.S. Marshal” won the 2010 Coretta Scott King Award for best author. This book clearly points out that Bass Reeves was well known during his lifetime. He died in 1910 and had the distinction of possibly being the first African American to be appointed US Deputy Marshall. That, coupled with his amazing record of having caught over 3000 ‘bad-guys’ would qualify him as a topic of conversation during and after his lifetime. Perhaps enough of a topic to be the subject of an exciting radio broadcast.

In his article, Mr. Naziri wrote that many of the outlaws who were captured by Bass Reeves and his Native companion were sent to a Detroit prison. Is it a co-incidence that this is the city in which the Lone Ranger radio show originated?

Here are some of the points Mr. Naziri makes in his article along with my own comments:

Bass Reeves rode a white horse, as did the Lone Ranger.

Bass Reeves was a US Deputy Marshall. The Lone Ranger was originally a Texas Ranger.

Bass Reeves was a noted ‘crack shot,’ as was the Lone Ranger character.

To contrast, Bass Reeves was a black escapee ‘slave’ while the Lone Ranger was a white man coming from a relatively privileged life.

Bass Reeves lived in Oklahoma on the northern border of Texas among the Seminole and Creek while the Lone Ranger was born in the mid-west part of Texas.

Bass Reeves’ riding companion would have been Seminole or Creek while the Lone Ranger’s fictitious companion, Tonto, was a Potawatomi.

Does anyone care that an article suggests that the Hollywood characters, the Lone Ranger and Tonto, were based on historic figures?

Well, I would say the answer is “yes”. I personally care about getting closer to the truth. If, in fact, the fictitious Lone Ranger and his companion, Tonto, were inspired by the life of a man named Bass Reeves and his unnamed Native companion then it becomes important. To recognize these human beings and a historic human condition is to honour these real life people, their birth, life and death. It’s a ‘remembrance’ of who they were and what they did. It’s the right thing to do.

So, what does this have to do with the Tonto character played by Jay Silverheels in the TV version or the new Lone Ranger movie released this year?

The possibility that there could have been a real Tonto is interesting. Isn’t it?

The suggestion that the Lone Ranger character concept could have been based on a historic, adventurous and dynamic African American person cannot be ignored.

As early as 1526, Natives captured and/or accepted runaway African slaves and brought them back to their communities, gradually integrating them. Runaway African slaves knew they could find safety among the Native/First Nations people. There are stories within the Grand River Six Nations community which illustrate that around the time of the underground railroad relationships were developed between Blacks and Natives. So, Bass Reeves’ acceptance within the Native communities in Oklahoma would not be unusual. His relationship with a Native companion would likely have been held in a higher degree of mutual respect and acceptance than the relationship between the white Lone Ranger and Native Tonto.

I would conclude that the Lone Ranger and his Native companion are in fact based on a rather interesting and overlooked historic fact. I will have to consider adding this ‘new’ information when I reprint a second edition of my book, “Tonto: The Man in Front of the Mask.”

As we say in Canada, live and learn EH. 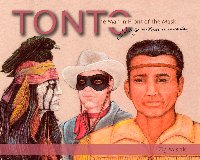