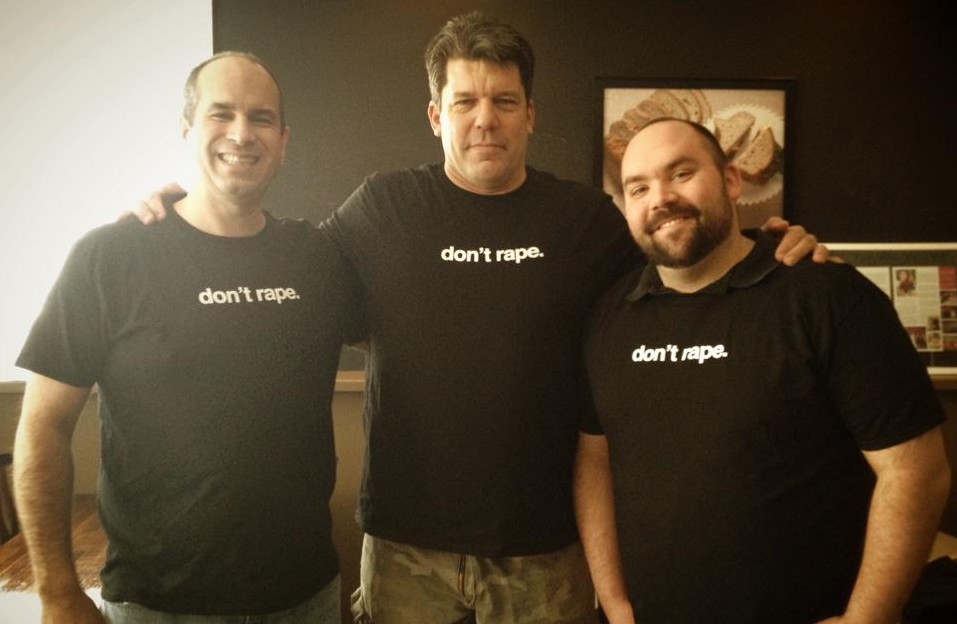 I was at work one day behind the counter when four fine men of our community entered the establishment and began, without warning, to take off their shirts. No, I don’t work at a Chip ’n Dale’s. I work at a bakery and these men were getting ready to make a statement. Once they were down to their undershirts they pulled black t-shirts out of a cardboard box and proudly pulled them over their heads. Across their chests in bold letters read their unmistakable statement: “DON’T RAPE”.

Now, I’m familiar with Nova Vita’s “We Want No More” campaign aimed towards preventing violence against women, and I knew these t-shirts were coming, but seeing the reality of the words so boldly projected into public view gave me a bit of a shock. After a few moments of gazing at those t-shirts on those men, that sense of shock subsided and gave way to a gentle sweep of relief.

What was relieving about these shirts and their stark message? Well, for the first time in my life I was seeing men I respect stand up and poise themselves to address the persons solely and directly responsible for this horrific crime: the rapists. For the first time, I was hearing men add their voices to the voices of women to say, “No More.”

I’ve heard many rape prevention talks and most all of them only address women or other vulnerable persons. The message is almost always, “Don’t let this happen to you. Here are some tips…” placing the greatest weight of burden and responsibility on shoulders that should never have had to carry it.

Don’t get me wrong; I’m not saying that it isn’t important to make sure we’re wise and safe. The tips are great. To refuse drinks from strangers at parties, to walk in groups at night, to meet publicly for a first time date and to learn self defence are all good pieces of advice, however; to prevent rape we need to start getting to the root causes and attitudes which serve to foster the idea that this is a justifiable act in the minds of the perpetrators.

T-shirts with a message like these will, of course, stir up conversation, if not a good old controversy or two. It was said by one individual that these shirts unfairly target men. Looking at them though, they make no message of man nor woman. They simply say, “Don’t Rape”.  Rape is a human problem and all humans need to take a stance against it. No man I know who hadn’t committed that crime would be afraid or offended by those shirts. Another criticism was that the message is too shocking. Rape is shocking. But not talking about won’t make it stop. We need dialogue, not whispers. If we are too afraid to face these words how will be begin to tackle the issue they represent? We need to bring this topic from the shadows and hack off the shame surrounding it. This issue isn’t just a few scattered incidents in the lives of people we don’t know. This issue of rape spans across the globe from rape as a tactic of war, to the horrors occurring in the Congo, to the gang rapes in India, to the rapes recorded and maliciously exposed on social media to possibly your friend, neighbour, wife, son or daughter. It all needs to stop. Prevention by means of warning people to be safe is hardly enough. We need to change the attitude that this is acceptable. We need to change the attitude that if someone has been hurt in this way it’s because they’ve allowed it to happen. That’s the easy way out of the conversation. Let’s talk about our society and its constant use of near-pornographic images in advertising, even that aimed towards children. Let’s talk about songs and films that glorify or make a comedy of sexual violence. Let’s talk about the traumatic processes victims go through when reporting this crime, thereby causing many cases to go unreported. But let’s get off the “victim let this happen” wagon.

Another criticism I heard was that kids might see these shirts. Well, good. When we choose silence the wrong voices are heard all the more loudly. The term “rape culture” was coined in the 70s and refers to “a concept that links rape and sexual violence to the culture of a society, and in which prevalent attitudes and practices normalize, excuse, tolerate, and even condone rape”. To understand what this looks like in reality, look at the tragic Rehtaeh Parsons case. Gang-raped at a party and ridiculed by school peers. She later committed suicide to escape the unrelenting horror of it. There are unfortunately a number of cases mirroring this one. How about that infamous university chant exposed this past summer? Part of it goes, “Y-O-U-N-G at UBC, we like ’em young! Y is for your sister, O is for oh so tight, U is for underage, N is for no consent, G is for go to jail.” Thousands of kids have sung this chant. Lyrics in too many songs our kids listen to glorify the idea of “gang banging” or getting with someone too incoherent to give consent. Let’s start by reaching our kids before these messages do. We need to teach them how to dissect what they hear in the media. If we don’t give them a language to discuss something with, someone else will give it to them. Even very young children, if they ask about that word, can be taught that it refers to a way in which someone hurts another person’s body. By the time kids are in grade six or seven they’ve heard terms like, “ gang-bang, pimpin’, ho, rufies, cock-tease, slut, etc,” and these horrible terms are absolutely glorified as representing rites of sexual passage.

The lyrics from one of the most popular songs of last year are, “I know you want it…talk about being blasted…I hate these blurred lines…I’ll give you something big enough to tear your ass in two…not many women can refuse this pimpin’…Do you like it hurt? Like it hurt. What, you don’t like work?” This song was blasted from every radio this summer and was top of the charts for months. It’s called “Blurred Lines” and it is not by any means the only song out there of this nature. So, for every one time some guy like Robin Thicke tells our kids that, “It’s cool,” in a song, they need to hear a hundred times from people within their community, “No, it absolutely isn’t!”

Another positive point about these t-shirts is that it shows the community that there are people who care passionately about this, and there is in fact a network of supportive men, woman and organizations in place for people who need support and guidance. These t-shirts say that here, in Brantford, we are not afraid to tackle this issue and rally support behind anyone who finds the courage to come out and ask for it. Will these t-shirts ultimately stop someone from committing rape if their mind is set to it? No. They will, however, be a huge step forward on the path to changing the current culture surrounding rape and how we as a society respond to it while cultivating healthier, more holistic way of brining education and awareness to our citizens, putting the onus where the onus is due.