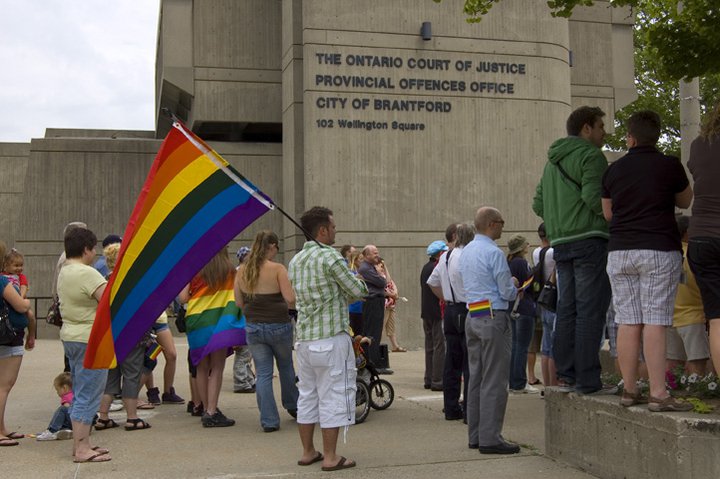 For the third time in the city of Brantford’s history a pride flag will be raised at city hall on June, 14 at 3 p.m. to commemorate the beginning of Brantford Pride Week. As this event approaches, it is important to reflect on what this flag means to the LGBTQ (Lesbian, Gay, Bisexual, Transgendered/Transsexual and Queer) community and the many ways that this community has strived for recognition and acceptance in Brantford and beyond.

The most well known version of the pride flag was popularized in the late 70s by American artist Gilbert Baker. When the San Francisco Gay and Lesbian Pride Parade commissioned Gilbert to create a new symbol that represented the LGBTQ community he decided that a rainbow would best celebrate the diversity of the community. Gilbert Baker incorporated eight colours in his flag. Each colour was assigned a meaning: hot pink for sexuality, red for life, orange for healing, yellow for sunlight, green for nature, turquoise for magic and art, blue for serenity and harmony and violet for spirit. In an interview with American broadcaster CBS, Baker reflected on the flag’s meaning: “It’s beautiful, all of the colors, even the colors you can’t see. That really fit us as a people because we are all of the colors. Our sexuality is all of the colors. We are all the genders, races and ages.”

The rainbow flag and it’s display of vibrant colours have come to represent many feelings and sentiments for the LGBTQ community. It has become symbolic of acceptance and celebration. It also incites feelings of safety and support. LGBTQ people are more likely to experience physical or verbal victimization than the general population. It is especially true that LGBTQ people are taught or told by dominant culture to feel ashamed of their lives. The rainbow flag helps to throw off this shame and create an atmosphere of acceptance that encourages everyone to feel welcomed and proud.

In 2010, a task force dedicated to promoting the presence of the LGBTQ community in Brantford was formed. This task force eventually became the community group now known as The Bridge. In June 2011, members of The Bridge approached the Mayor and Council of Brantford and for the first time a pride flag was raised to declare the third week in June Brantford Pride Week. Until this point, Brantford was the only municipality in Southern Ontario not to have a Pride Raising ceremony.

Christine Wildman, co-chair for The Bridge Committee (a group that works to identify and address inequities that are experienced by the diverse sexual and gender identified communities within Brant County) reflected on the importance of what the Pride Flag represents:

“For me the pride flag represents diversity and inclusiveness. It is important that the flag be raised in Brantford because a visual presence will not only promote acceptance and inclusiveness, but also aid in reaching out to LGBTQ members of the Brantford community that may feel isolated and alone.”
The pride flag is an encouraging symbol of strength for the LGBTQ community. Tara Buchanan, a member of the Brantford Pride Committee, recalled how she felt when the first Pride Flag flew in Brantford:

“I was 32 years old and very comfortable in my skin, but as I stood and watched the first pride flag fly at Brantford’s City Hall tears rolled down my cheeks. Not for the woman I was that day but for what it would have meant to the 14 year old girl roaming the halls of BCI feeling completely alone. The Flag is a celebration of who we are, and like any party the more the merrier. So Please join us.”