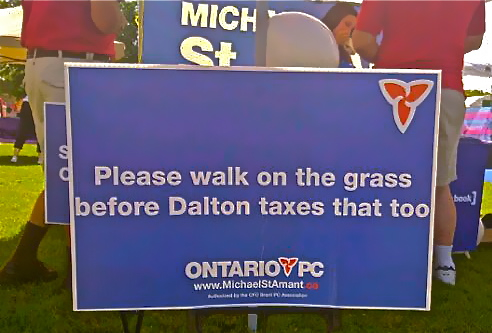 When I ran as the Progressive Conservative candidate for Brant during the past provincial election, the most common question I was asked was “Are you related to Lloyd St. Amand, the former Liberal Member for Brant?” My response was usually “No, Lloyd spells his name with a D and I spell my name with a T.” I suppose if our names were Smith, few people would have cared, but given the fact that our names are somewhat unique in the Brant area, I can understand the confusion.

At times I was confused myself. During a visit to the Polish Hall during the International Villages, my Campaign Manager decided that I should be introduced. If only he knew how much I hated doing that, but it is part of the political process. He saw the NDP candidate in the audience, so he approached the Master of Ceremonies about introducing us. First she introduced the NDP candidate. Then it was my turn. She introduced me as Lloyd St. Amand, the PC candidate for Brant. I stood and waved.  When I returned to our table, two elderly Polish gentlemen were sitting there. One immediately asked me if I was St. Amant, the politician. I said I was and he said I was the wrong colour and he would not be voting for me. I was wearing a red shirt, so I never knew whether he was talking about me or about Lloyd.

In some instances, people saw a conspiracy in the fact that our names were similar. One lady in Paris said that it was clearly a Conservative plot to confuse the voters and I should be ashamed of myself for being a part of it. I don’t think I got her vote. Other people thanked me having helped them previously, which was a testament to Lloyd’s service to the community. A few stated that my looks had really changed over the years. An elderly lady, who had invited me to tea, reminded me of the time I had helped her husband with a legal matter and that she was really pleased that I would take the time to visit her. You can imagine how awkward it was trying to explain to her that she had me confused with Lloyd. Then she asked me why I came? My only response was that her invitation was to Mr. St. Amant and that I had been unaware of the nature of the invitation.

Throughout all of this, it was interesting to note that nobody had asked me if Lloyd was related to me.  It was always “Are you related to him?”

The reality is that I cannot honestly answer that question. In French, the “d” and “t” at the end of a name is meaningless. I have relatives in Quebec who spell their name with a “d”.  The “St. Amant” or “St. Amand” is a location name derived from any of the various places dedicated to St. Amantius or St. Amand. When settlers or soldiers moved to New France, they often added a “dit” to their names.  As a result, you will often see families with the primary names of names André, Charrier, Huchereau, Lepage, and Robert, among others, using the locational name of St. Amant.

Our family name, for example, André dit St. Amant, can be traced back to 1534. In France, my ancestors were the André family from the Notre-Dame de Taillebourg Parish, located in the Charente-Maritime Region. When Louis André arrived in New France as part of the Périgny Regiment around 1730, he added the “dit St. Amant” to his name. Interestingly, on some documents it is spelled with a “t” and on others with a “d”.

In my youth, I was completely unaware of all the family ancestry until my father died in the mid-1980’s. Growing up I was always called St. Amant, or occasionally, Sani-Flush because our family was in the plumbing business. When my father passed away, we began processing his will and insurance, but could find no records of a Lawrence St. Amant. When we found his baptismal certificate from 1923, he was listed as Lawrence André dit St. Amant.  I asked one of my remaining aunts about this and she said that the family name was André dit St. Amant, but my Grandfather stopped using the “André dit” because the extended name was too long for his plumbing sign. Given the choice of using “André” or “St. Amant”, he chose St. Amant. In English, it means Saintly Lover. Being farmers, each generation of the André dit St. Amant family moved a little further West in search of land.  The farms could not support the large families that seemed to be a consistent theme in our family history. Along the way to Penetanguishene, where my family settled in the 1880’s, groups settled in the Vaudreuil, Cornwall, Ottawa and Kingston areas. Others moved east towards the Maritimes. Most were farmers, but there were voyageurs, doctors, lawyers, poets, and plumbers. A group settled in the United States, following the lumber industry. Some have maintained the André name while others have evolved into St. Amant or St. Amand.

It is not inconceivable that Lloyd and I could be related. I suspect that with a little work, the question could be easily answered. In some respects, it might be fun to find out. In others, it takes away the mystery and a topic of conversation that was for the most part, a good way to break the ice when I was canvassing. Despite the fact that people were curious, I do not believe that they really cared. For my part, if we are related, I think that would be great. Lloyd has made an important contribution to the community both as a Member of Parliament and as Chairman of the United Way. There is nothing better than being able to point to a relative with such notable accomplishments!