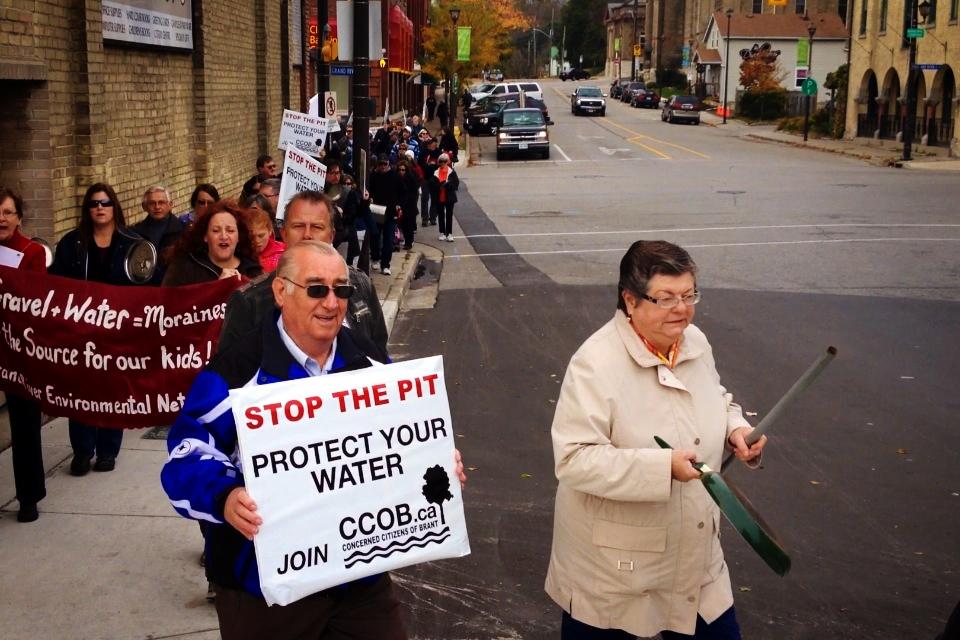 Who will protect our water?

This is the question that should be on the minds of every citizen of Brant County.

The Concerned Citizens of Brant is a grassroots group which formed when it was announced that a gravel pit was commencing operations on 614 acres of farmland, located above Paris’s water supply.

The CCOB has since raised significant concerns regarding the planned opening of the pit. We say the potential impact on the community and the environment of Paris and Brant County has not been assessed using current standards.

The situation? In 1974, Dufferin Aggregates was issued a license by the Ministry of Natural Resources to commence operations at the Paris site. The license was supplemented with a schedule, containing ten conditions deemed relevant according to the MNR’s understanding of the area. This included the available transportation systems, road structures, environmental considerations and affected populations that existed at that time. Over the following 38 years, Dufferin opted not to commence mining operations on this site and many of the circumstances that lead to the conditions placed on the license have become obsolete or ineffective. Thus the situation now stands that a pit, licensed in another era, has not been assessed regarding source-water protection, the environment, roadway infrastructure, and public safety within the guidelines of today’s standards.

As residents of Brant County, the town of Paris and surrounding areas, we are strongly opposed to the commencement of this mining operation and have requested support from both the Ministry of Natural Resources and the Ministry of the Environment. We are still waiting for responses to our questions.

The following are our primary topics of concern.

The community of Paris and Brant rely on primary wells located adjacent to the aggregate site (The Telfer and Gilbert well heads). The pit property is situated primarily in a wellhead protection area and the water table in this area is quite shallow, with most properties having dug or shallow-drilled wells. Dufferin has been approved to mine throughout approximately 600 acres of this wellhead protection area and to a depth of approximately 20 feet below the water table on sections of the property. A 12 acre gravel wash pond will be excavated on the site in which digging below the water table will be required at commencement. Mining will also strip away the natural filtering effect of the soil, which we feel puts the community of 12,000 at greater risk of groundwater contaminants seeping into the aquifers. In many regions in Ontario, open pit sand and gravel mining has been prohibited in wellhead protection areas as a proactive means of preserving source water resources. As a result of the unchecked continuance of the 1974 pit license, we feel our water resource is at risk of adverse effects concerning both quality and quantity.

The pit site is situated directly between, and in close proximity to, the Gilbert Creek Watershed and the Grand River. Both are recognized as natural heritage systems that must be preserved. The property has many surface streams, springs and underground systems that feed into the Grand River from this location, and affect water temperature and nutrients that help support a healthy aquatic environment for many species in this Heritage River. Disruption of this flow, or polluted runoff, could have a lasting negative effect on the health and vitality of the river downstream of the site. Grand River Conservation Authority studies have indicated that 70% of the drinking water for the town of Paris originates from the Gilbert Creek Watershed. The Watt’s Pond, and other ponds on and around the Dufferin property, are home to snapping turtles and, for the past three years, have attracted attention from Toronto Zoologists who believe the area may be home to the Blanding’s Turtle – listed as an endangered species in Ontario.

Impact due to Traffic, Noise and Safety Concerns

The primary access to the Dufferin site is Watt’s Pond Road, which is currently a narrow rural roadway with minimal structural foundation. This rural road is host to many joggers and cyclists, and is also part of the daily bus route for both primary and secondary school students. There is significant concern among us residents that the proposed level of gravel truck traffic on this road could pose a serious danger to Brant’s residents and school children.

Truck diesel fumes and dust generated by the pit operations will affect local residences and the community of Paris. The original site plan and license was approved based on removing aggregates by rail. This option is no longer available since the rail line no longer exists. The continuous shipment of aggregate via gravel trucks (exceeding 30 trucks per hour) along the road systems has not been adequately assessed for the dust and pollutants that will be dispensed into the air. Additionally, the impact of the crushing plant and other equipment on the air quality has not been satisfactorily addressed.

In 1974, the outcome of the Ontario Municipal Board hearing that established the basis for granting Dufferin Aggregates their license to operate, categorized the impact of this large scale mining operation with the following:

“The proposed operation would be a most innocuous operation… There would be no effect on the environmental character of the surrounding area…there would be compatibility with any existing dwellings in the area.”

The CCOB is grateful the county of Brant’s Mayor Ron Eddy and the council for their support. Council issued a letter to request that the Minister of Natural Resources revoke the license of Dufferin Aggregates. This is a positive step forward.

There has not been any recent contact with MPP Dave Levac of Brant, although he has sent representation from his office. NDP representatives Brian Van Tilborg and Marc Laferierre have both been very supportive, and have listened to the serious concerns that could affect the residents of Brant. CCOB met with MPP Jonah Schein, environmental critic for the NDP, who is very much on the side of the CCOB. The Green party has also shown concern. Council of Canadians and Gravel Watch, have both been allies to the CCOB.

You the citizens of Brant need to find your voice and support the efforts of the CCOB. It is the people who make real change. Help stop the Paris Plains from becoming the Paris Pits. Contact the MNR and MOE as well as your MPP, let them hear from you.