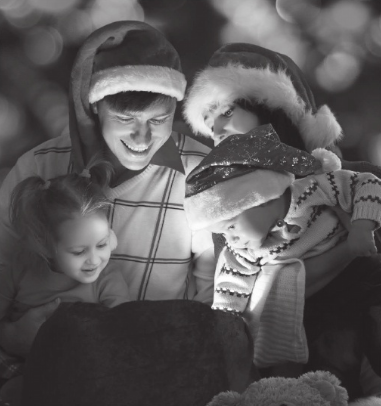 Sometimes I lament the society we have become. Recently, I was looking for Christmas cards to send out to friends only to discover that the vast majority say, “Happy Holidays”rather than, “Merry Christmas”.

Most people are probably indifferent to the nomenclature attached to this period of the year, but I am one of those people who celebrate Christmas, not the holiday season. When I think of Christmas, it is the birth of Christ and, yes, Santa Claus that provide meaning and memories. It is not some concept of a holiday season imposed on us by self-righteous politically correct police that provides meaning for me. While I do not desire to offend people of other faiths, or my agnostic and atheistic friends, I simply want to enjoy and express a sense of spirit that is defined by Christmas.

We are, after all, the accumulation of the events and acts that contributed to our development. In some respects, I am the manifestation of the sixty-five Christmases that preceded this year’s celebration. For me, the pillars that provide the foundation for Christmas are faith, hope, charity and family celebration.

I am the heir to my mother’s love of Christmas and to her desire to make each Christmas more memorable than the one before. She ensured that Christmas combined both the religious acknowledgement that the day would not exist without the birth of Christ, and the arrival of Santa Claus who, on this one day of the year, lavished us with gifts. Preparation for Christmas began in July with baking of my grandmother’s Christmas cakes, and on into late September when chili sauce was made to be served with the pork pies that would be part of the reveille that would follow midnight mass. On Christmas Eve, boxes of food loaded with fruits, vegetables, nuts, candies and a large turkey would be delivered to our house, compliments of our family’s plumbing business.

I tried explaining my sense of loss over Christmas to a friend. His view was that I was a dinosaur not facing the reality of today’s multicultural world. Progressive people, another said to me, don’t worry about such things.

In some ways, I find those views a sad testament to our times. Surely there is a sliver of room in the blurring of society to allow us to recognize our past and to celebrate those things that bring meaning to us regardless of our cultural backgrounds and heritage.

Am I to forget my excitement as Christmas approaches? Should I feel shame for wanting to honour Christ’s birth? Am I discouraged from sharing the memories of Christmas past with my family and friends because to acknowledge Christmas in some way other than a commercial event is no longer cool?

Do I abandon my memories of when, as a child in Penetanguishene, I walked down Main Street in mid-November to look at the toys being displayed in the windows of MacDonald’s Hardware, and then crossing over to walk through Charlebois’ Five & Ten? I remember fighting with my brother and sisters to look at the Eaton’s Catalogue for all of the exciting new toys that were coming on the market in the 1950s.

Our Christmas tree was usually a Spruce tree, about ten feet in height, crowned with a large angel and covered with lights, icicles and bulbs. The tree was usually taken from the woods and was put up the second week in December. The fragrance permeated our living room. By Christmas Day, the base of the tree would be covered with a mountain of presents calling out to be opened early Christmas morning. Often my brother Frank already knew what he was getting for Christmas because he had spent the days before scouring through the house looking for hidden presents, many of which my mother had acquired in the months leading up to Christmas. Our Christmas afternoon passed watching “A Christmas Carol” starring Alastair Sim. It was a tradition in our house, though by default because we only got one channel, CKVR Barrie, and that was the movie they aired every year. Christmas dinner was an event, first at my grandfather’s house with over forty grandchildren competing for a space to eat. After the death of my grandmother, the Christmas dinners were at our home and although the numbers were smaller, the competition for food was equally intense.

Our family would attend the midnight mass at Ste-Anne’s Church. The walk from our house to the church was usually frosty. As I grew up and became an altar boy, I would make sure that I was on the roster to serve at midnight mass which, until the mid-1960s, was in Latin. The Choir usually had thirty to forty members and put on a program made up of French and Latin carols. The church was always packed and smelling of incense. At Christmas the sermon was generally upbeat compared to the fire and brimstone that we would get on regular Sundays. After mass, friends and relatives would meet on the steps of the church and wish each other a Merry Christmas. Some would drop by our house on their way home. It was about faith, family, friendship and community – and it was exciting!

I recall asking my mother in later life why she put so much effort into Christmas. After thinking about it for some time, she said that maybe it was because it was the one day of the year when her family was truly happy when she growing up. Maybe it was because she had grown up during the Depression and WWII. Or maybe, she said, it was the one time of the year when her own family would always come home and spend time with one another.

And for my mother, what would bring us all home would be the memories of Christmases past, and the hope that it represented for our future as a family.

Yes, I am my mother’s heir. “Merry Christmas!”