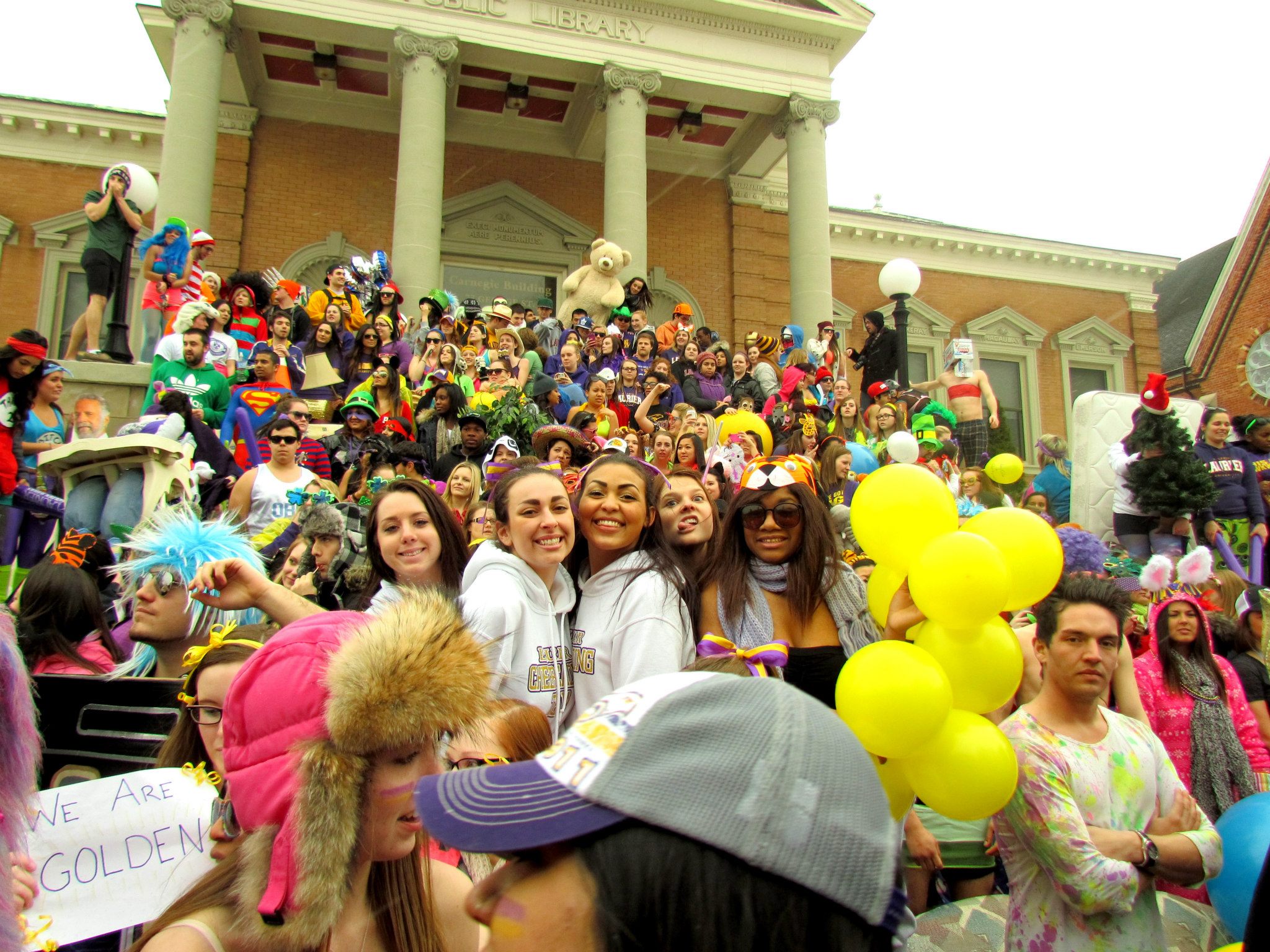 On Thursday, February 14, 2013 Laurier Brantford galvanized in front of the Carnegie Building to show what a small school can do by executing a flawless version of the Harlem Shake.

The Harlem Shake is a dance based on the song by electronic musician Baauer. How it works, typically, is one person, surrounded by seemingly unaware people, begins dancing to the song alone. But when the bass drops, the camera transitions to the entire crowd doing the dance, wearing ridiculous outfits, which range from costumes to minimal clothing, while boasting equally strange props. The Shake has become an internet sensation. Just this month, Late Night with Jimmy Fallon, TSN’s SportsCentre, and a few campuses did their own versions of it.

So why not Laurier Brantford? That’s what Ashkan Moubed thought when he decided to kick-start an initiative for Laurier Brantford to have the event. “I thought it would be a great way to put our small campus on the map,” he said.

He joined forces with Oje Izirien, a proud fellow student and DJ at Club NV, to spread the word and make the event happen.

The response was a resounding success and the actual turnout was even better.
Moubed estimates actual attendance of this event to be between 450 to 500 students! All crammed on one staircase in front of one building. “We were incredibly surprised with the turnout and are exceptionally pleased,” gloats Izirien.

Jessika Miller, a school ambassador, says Laurier Brantford is quite small compared to the typical university size. “But we can still bring the same school spirit as the biggest ones,” she claims, then asserts, “if not more.”

Laurier-Brantford’s population of 2,400 is dust in the wind compared to giants such as Western in London, which claims its enrolment to be north of 35,000. Miller estimates enrolment at the main campus of Wilfrid Laurier (Waterloo) to be around 15,000. This makes Brantford a satellite campus, and seemingly an afterthought. “A lot of people don’t even know about our campus,” Moubed admitted disappointedly.

Laurier Brantford holds some parallels with Burford District High School, which was so small compared to neighbouring high schools that it eventually succumbed and closed.
But Laurier Brantford isn’t going anywhere. Its numbers are growing, and school spirit hit an all-time high with this event. Katie Skinner, a Laurier-Brantford graduate in 2012 said, “I’ve never been more proud of Laurier-Brantford.”

Although the 450 to 500 attendees was not the biggest Harlem Shake on record, Moubed claims to have topped Western, Guelph, McMaster, and Brock’s numbers. Eighteen percent of Laurier Brantford’s student population attended the event, a fairly remarkable feat. “I like to think we bring it,” Miller concluded.

“I think we’ve proved that numbers definitely don’t matter,” Moubed asserted. “We are a close-knit community that comes together with exceptional spirit and conviction.”

“I was pretty impressed for such a small school, that so many people came out and joined in,” said Izirien, who persisted that the video show the Victoria Park statues, which are in view from the Carnegie Building, because they have become an adopted monument for the school.

It was also important to show the Carnegie Building since it typically is the first building for Laurier students. “The main points of our Harlem Shake was to get things that students found as statements of Laurier Brantford culture and statements for Brantford in general,” claimed Izirien.

Among the unified crowd that was packed like sardines on the stairs were Batman, Sailor Moon, a green man with a horsehead, Superman, a man (we think) in a banana suit, as well as a few guys almost in their birthday suits (along with many scantily clad females), despite the sub-zero temperatures that came along with February in Ontario.

“It also was great to see how nuts we were,” said Izirien. “People always see our campus as bland and boring, but to see some of the bare chests in that weather shows just how crazy our campus is. We really competed with all the bigger schools. I’m so damn proud of Laurier Brantford,” he said proudly. “I love this school.”

Lizzie Janik, third-year criminology student at Laurier Brantford addressed the temperature. “Being freezing cold has never felt pleasant, until the Laurier Brantford Harlem Shake video.” Her comments were commonly held by those attending.

“We’re so proud of our Golden Hawks and the effort they put in,” Mouben said glowingly. Izirien echoes Moubed’s comments: “I was extremely happy with the turnout. I’m so happy that so many Laurier Brantford students were proud to show where they are from and what they are: proud Golden Hawks.”

Also attending this event was a fire truck courtesy of the Brantford Fire Department, a city bus, the Rogers television crew, and many local onlookers who packed the street opposite the building to witness the spectacle. The event differed from typical Harlem Shake videos in part because it took part on stairs. However, there were no injuries reported (most renditions of the dance are also inside).

“It’s my last year here so I wanted to do something big,” announced Moubed. “We thought it would be a great way to raise school spirit and show everyone that even though it’s Brantford and we’re small, we can still go hard.”

The sound system setup was very loud, and the crowd’s collective positivity made it an unforgettable event. The craziest part of the event was when the bass dropped to the song, a student crowd-surfed from the top of the stairs on a mattress, as his fellow 500 students danced and screamed their way to solidarity, putting Laurier Brantford on the map. Moubed and Izirien succeeded in their endeavour, unequivocally, perhaps giving the bigger schools a lesson in unity.

The video, which has went viral is titled: Laurier Brantford Harlem Shake. It had over 3,000 hits in its first day uploaded. Izirien, the DJ, headed down to Club NV after the initial filming for another taping of the Shake, to fill in any possible holes in the video. Izirien was insistent that having part of the video shot at Club NV was important, since the bar has been a staple in the lives of any Laurier Brantford students.