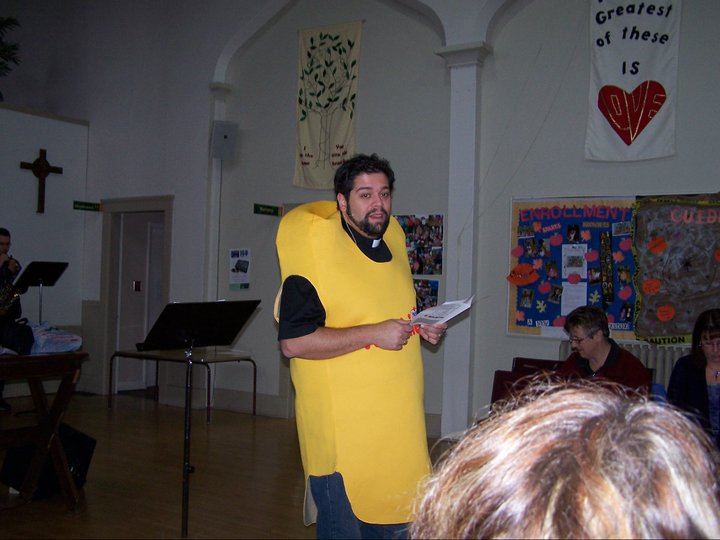 Two years ago I became an Anglican Priest. I often compare my ordination experience to Peter Parker getting bit by the radioactive spider. It was unexpected, and the next morning I realized that I had special abilities. Unfortunately these abilities do not include scaling walls, shooting webs, or having a ‘Spidey Sense.’ Rather, when the collar went on it appeared that my main superpower was the ability to get people to apologize after they used foul language.

Not only do I have the ability to draw out apologies, I’m also magnetic. Yes, I have the power to attract people who need money for a bus ticket to Toronto. With these two powers at my disposal I asked myself “what should my superhero name be?” I was stumped. This said I plugged Rev Massimi into an online superhero name generator; the name given: The Magnificent Liberator. I kid you not. For those reading I would like to inform you that this article is my debut: No need to fear people of Brantford The Magnificent Liberator is here, “Cleaning up language and getting people to Toronto.” Actually I’m not a superhero and my abs will attest to that fact. I’m a priest, husband, and father. I swear sometimes, get angry and yes, when my finger goes up it’s not because I think you’re number one. I make mistakes and I feel that it is important I say this; I’m not perfect, even though some people expect me to be.

A couple of years ago I took a Laurier student, who was an Atheist, out for a bite to eat. I wanted a burger, he wanted to grill me. We chatted for a couple of hours. Something he said during that time stuck with me, he said “at the heart of every pastor is a used car salesman.” I had to agree with him. As church leaders and congregations we say to ourselves, “If we act really nice maybe people will want to hang out with us.” So we try to say and do the right things hoping that you’ll take Jesus off the lot. I believe this is one of the reasons why people expect us religious folk to be perfect. We present ourselves as do-gooders who have never done anything wrong. In the past year I realized that, as a priest, people don’t want me to be perfect or good, they want me to be myself. God wants me to be myself. In sharing our true-selves with others we create a safe space where people are free to be themselves. In other words, by being myself I give permission for you to be yourself. We live in a world with so many demands on us. We are frequently expected to act or present ourselves in many different ways. For this reason I believe more of these safe spaces need to be created; for fear that we lose ourselves.

I love superheroes and I love superhero movies. A common theme that I’ve noticed in the movies I’ve watched is that every superhero has the need to confide and reveal their true identity to someone they trust. When I wear my collar I wear it not to be identified as “the moral police” or a “salesman” but as someone you can trust. Someone you can lift your mask in front of and reveal your true identity. My collar also reminds me that God does the same. He saw my imperfections. He looked beyond my mask and in spite of my shortcomings, has called me to create spaces where people can enter and know they are loved. With great collar comes great responsibility.